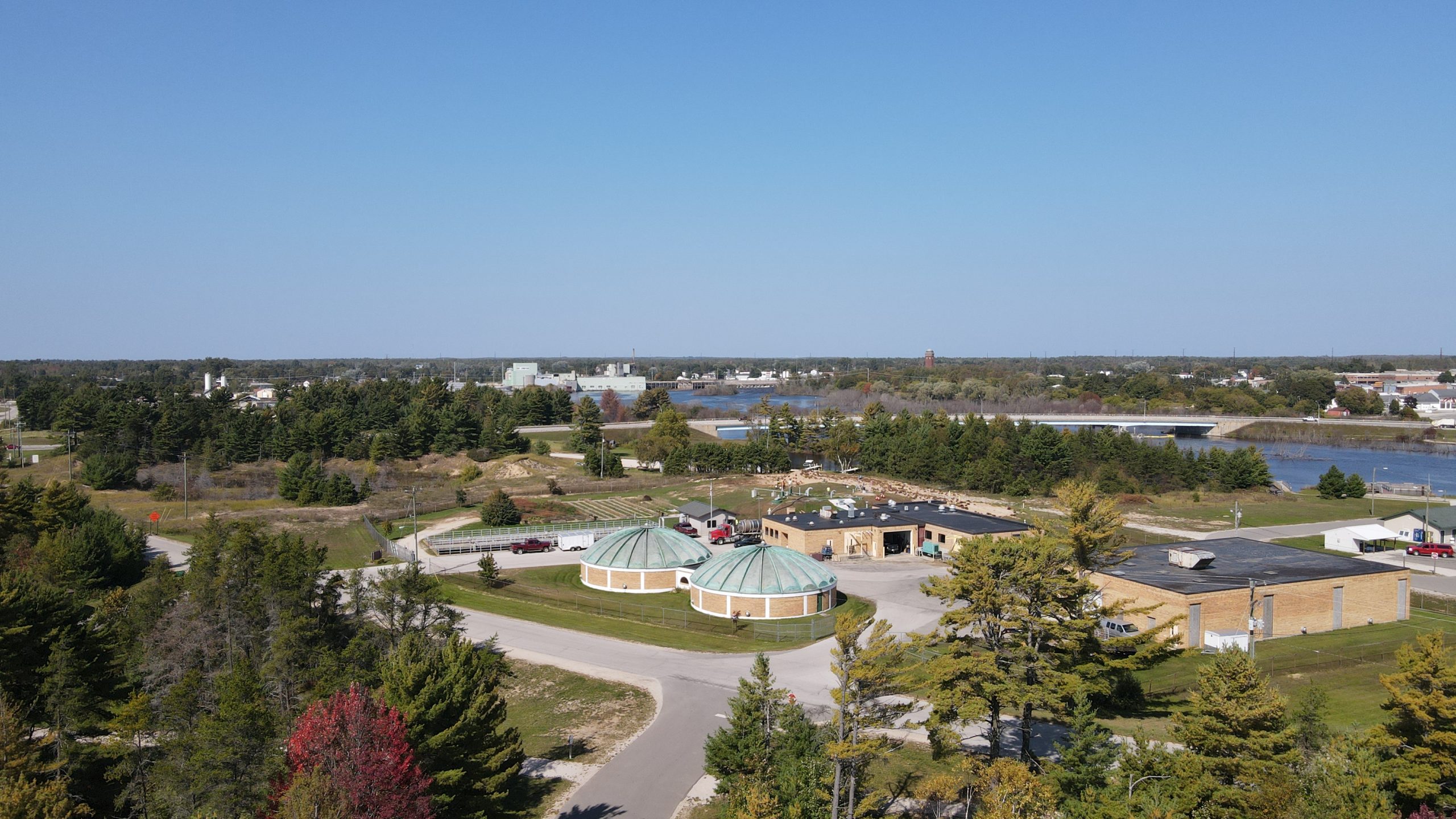 The City of Manistique draws its water from the Indian River at Intake Park. A dam controls the level and flow rate of the river in accordance with the needs of the municipal water system.

An elaborate and complex structure of underground piping forms the delivery system that supplies water to each and every structure in the city.

The newly constructed water tower acts as a reservoir and helps to maintain pressure in the system.

Wastewater Treatment
The City of Manistique built its original wastewater treatment plant in 1959. The plant was designed for primary treatment of 1.5 million gallons per day (mgd) of wastewater from combined sanitary and storm sewers. The degree of treatment provided by the original plant produced a treated effluent with approximately 60% removal of the raw wastewater’s suspended solids (SS) and 40% removal of the 5-day biochemical oxygen demand (BOD)  which is a measure of the pollution strength of the sewage.

In 1972, the United States Congress passed the Clean Water Act which required communities to upgrade their wastewater treatment facilities. Financial assistance of 100% was provided for this project with grants from the U.S. Environmental Protection Agency and the U.S. Economic Development Agency. In 1977, after the preliminary studies and final design were completed by McNamee, Porter and Seeley, the City of Manistique began construction of the plant additions and improvements which upgraded the degree of treatment of the existing facilities to secondary treatment levels and provided phosphorus removal. This treatment level produces an effluent with 90% removal of the raw wastewater’s suspended solids and BOD and 80% removal of the phosphorus. The upgraded treatment facilities are capable of serving a population of 6400.

The additions and Improvements included:

City officials have proceeded with action to provide both the upgrading of treatment facilities and separation of sanitary and storm sewers which is mandated by both the Michigan Department of Natural Resources and the U.S. Environmental Protection Agency.

The wastewater then flows into the plant influent wet well where four raw wastewater pumps lift the wastewater through a flow meter and to a mechanically cleaned grit chamber. Here, sand and grit in the sewage are removed to eliminate plugging and excessive wearing of equipment. The sand and grit are hauled away by truck.

Next, the wastewater is evenly distributed to the two original primary settling tanks. A portion of the solids in the sewage settle to the bottom of the tank. These solids, called primary sludge, are pumped to the sludge digestion system. Floating solids are skimmed from the surface of the tanks and also pumped to the sludge digestion system. When ferric chloride and polymer are added to the grit chamber, phosphorus settles out in the primary settling tanks and increases the volume of the primary sludge.

Excess biomass builds on the contactor and eventually falls into the treated wastewater which continues on to the final settling tanks.

In the two new 55-foot diameter final settling tanks, solids which were sloughed off the biodiscs settle to the bottom as sludge. This secondary sludge is scraped to a center hopper and removed via sludge pumps to the sludge digestion system. When ferric chloride and polymer are added to the treated wastewater upstream of the final settling tanks, phosphorus also settles out and is removed with the secondary sludge. The remaining clear wastewater flows over the weirs in the final settling tanks and flows by gravity to the chlorine contact tank where it is disinfected. The chlorinated final effluent is then discharged to the Manistique River.

In the first stage sludge digester (primary digester), sludge is continuously mixed and maintained at a constant temperature of 90° to 9SoF to accelerate decomposition of the organic material. The treated sludge flows by gravity to two secondary digesters where it is stored and the solids are allowed to settle.
The settled, digested sludge is then pumped to sludge drying beds. The original wastewater treatment plant had six existing sludge drying beds. Five new beds have been added. These drying beds have a sand surface with concrete strips on which to run the sludge removal equipment. Two underdrains collect the drainage from each bed. The drainage is returned to the raw wastewater wet well. The digested sludge takes two to four weeks to dry. The dried sludge is then removed from the beds and is used as a soil conditioner.

The operation and maintenance of the facility is under the direction of the Superintendent who has a staff to carry out the day to day operation of the plant. Included in the upgrading of the plant were a new Control Building and Laboratory. In the Laboratory, the operators analyze samples from various points in the treatment process to satisfy State of Michigan requirements and to insure efficient treatment plant operation. Automatic samplers were provided to collect samples of raw wastewater, primary settling tank effluent, final settling tank effluent and chlorine contact tank effluent.

​Process instrumentation meters and controls the various wastewater treatment systems. The main control panel indicates the output of many plant processes. It also contains alarms which alert the plant personnel to plant emergencies. If an alarm condition arises when the plant is not staffed, an alarm is sounded at the fire station and an automatic telephone dialer dials a predetermined series of emergency telephone numbers.